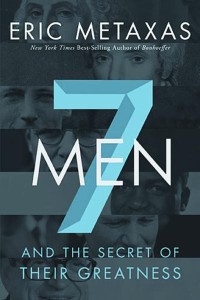 What does real manhood look like? Who are the role models for men today? These are the questions that lay the foundation for Eric Metaxas’ book 7 Men. Metaxas argues that the answer for what real manhood looks like these days goes to one of two extremes. In one extreme men are overly “macho.” Men like this use their strength to dominate others and control the weak. Metaxas writes that this is a man, “who might be a man on the outside, but who on the inside is simple an insecure and selfish boy.”  The other extreme, he argues, is the total lack of manhood, one where “there is no real difference between men an women.” Instead, he believes that the Bible give us a difference picture of what manhood should be. Men should be servant leaders. Just as Christ came not to be served but to serve, men are called to live their lives in service to God and to others. Even many times men are stronger, their strength give protection and serves those around them instead of dominating and lording over others.

For this reason, Metaxas selected 7 men he believes to be good examples of Godly manhood. These men were given power or fame and denied it. They lived in pivotal moments in history and used their lives to serve other instead of their own need. He writes about George Washington, William Wilberforce, Eric Liddell, Dietrich Bonhoeffer, Jackie Robinson, Pope John Paul II, and Charles Colson (two of whom he has already written about: Bonhoeffer and Wilberforce). For each man, he gives a brief biography focusing on the choices that they made that exemplified real manhood and not some other version. Each of these mini-biographies are very well written and he opens each one with a personal reflection and reason why he chose this man. Honestly, there are many men that he could have chosen from, but he picked this men mainly because of the formative influences on his life.

As a fan of artofmanliness.com, I thoroughly enjoyed this book. I know that for some the subject of “manhood” and “masculinity” may be over done or old news, but I do believe that this book is very beneficial. Whatever you believe about the roles of men and women, it’s hard to argue with Metaxas on the point that there are few good role models out in our society, either for men or women. This book provides just that, good Christian role models. Honestly, other than the fact that this book is all about men, beyond the introduction he doesn’t emphasize the idea of manliness and mostly lets the biographies speak for themselves.

7 Men is a great book that paints a brief and moving picture of 7 great men who did their best to life godly lives and make good impact on the world around them. I would highly recommend reading this book even if you don’t agree with Metaxas’ introduction. The lives of these men are great examples in world that desperately needs them. I also think the world needs to hear about the lives of 7 godly women, too.